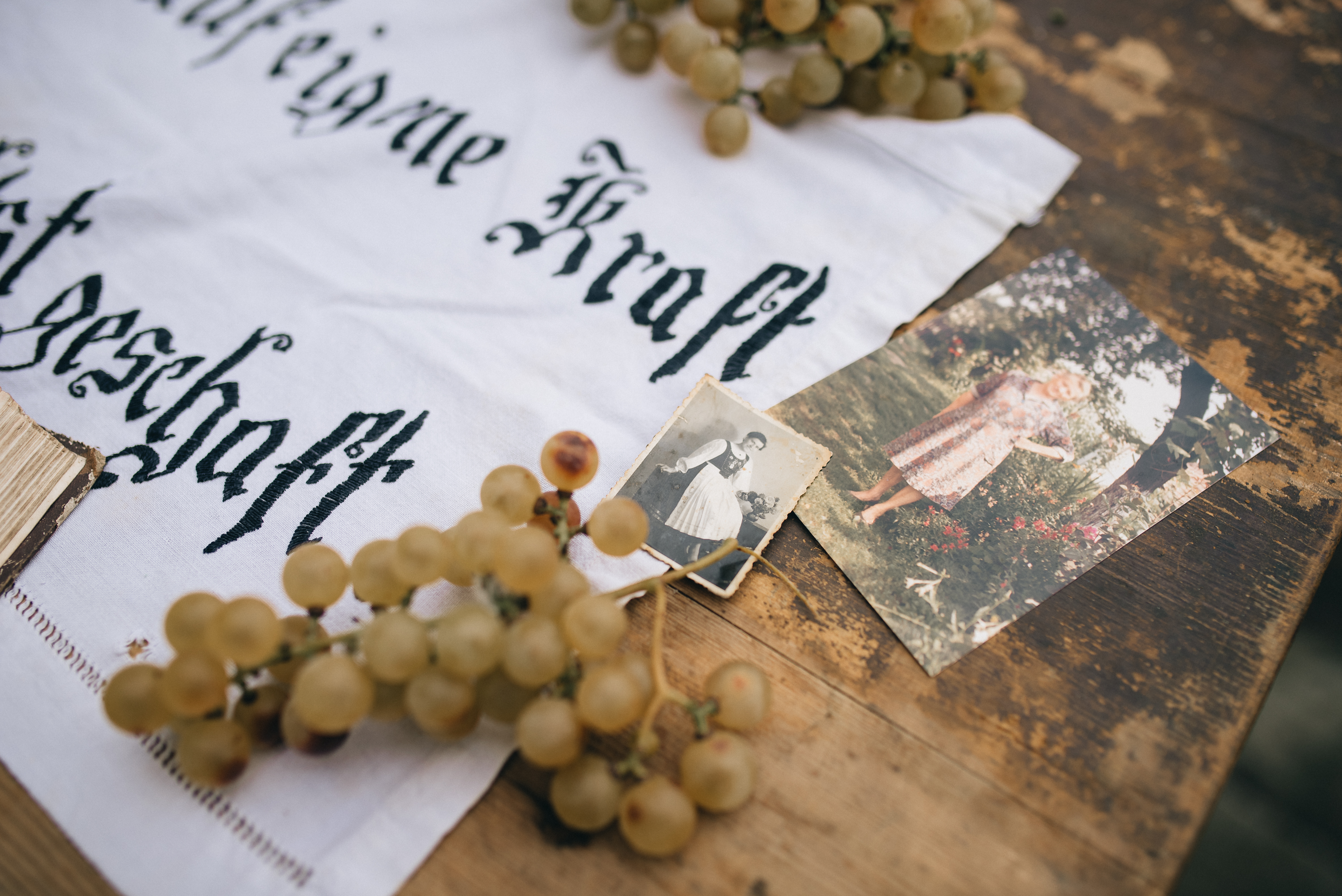 I was scared of my great-aunt Anna when I was a child. In spite of her cheerful nature she seemed to me to be somewhat odd, eccentric and above all far too short. I knew that she lived in the village, and I imagined her living in isolation on the edge of the woods, like the witches in Grimms’ fairy tales.

Many years later, when I had already been living with my family in Germany for a long time, I visited her in the village and to my surprise found no run-down shack there. The woman I considered a witch as a child ran a large farm, had a beautiful flower garden, read the canon of German literature and knew how to make a guest feel welcome with her cordial manner. 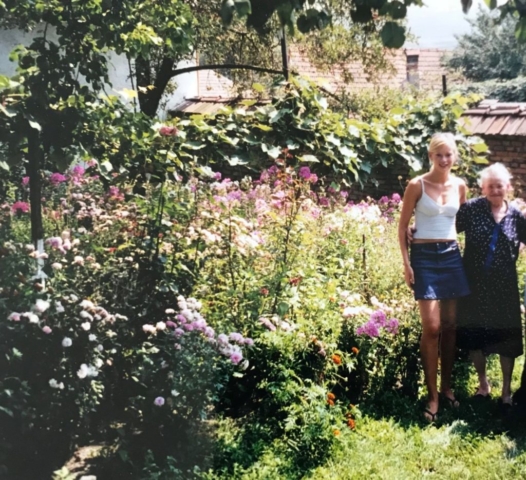 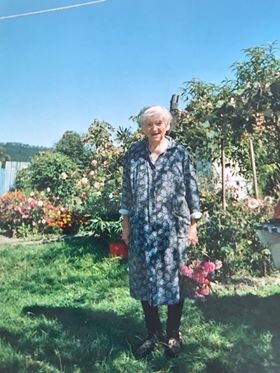 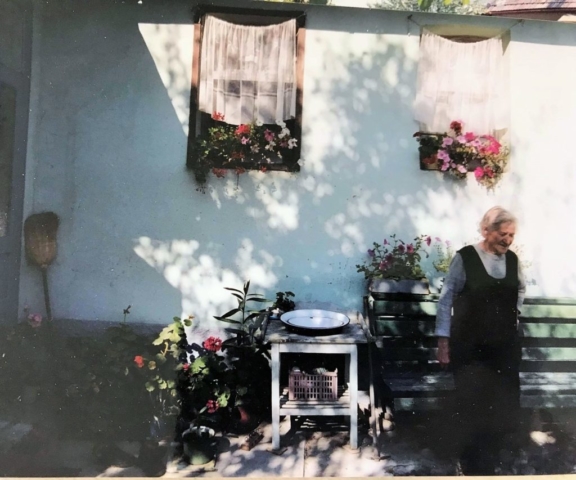 I saw the close relationship that my father and she had with each other, I knew of her numerous siblings who had all moved away or, like my grandfather, had already died, and I asked myself what kind of life she had led. All alone, with no family, in a remote village in Romania.

I found the answer when I saw her again many years later. At that time I had already grappled intensively with my Transylvanian Saxon roots. This made it easier for me to understand the time my great-aunt Anna was born into and why she was so attached to her little house in Abtsdorf, which she lovingly called “Appesstref”. It was her feeling of home, her affection for maintaining the Transylvanian Saxon traditions, which she had internalized from an early age and which she had lived out with such great joy. She had experienced the times in which the Transylvanian Saxon villages were full of life, characterized by dance and music evenings, exuberant crown celebrations, spinning yarn with friends, and by neighborly help for those in need. She knew everything that constituted the sense of community and social togetherness of the Transylvanian Saxon ethnic group in Romania over the centuries. 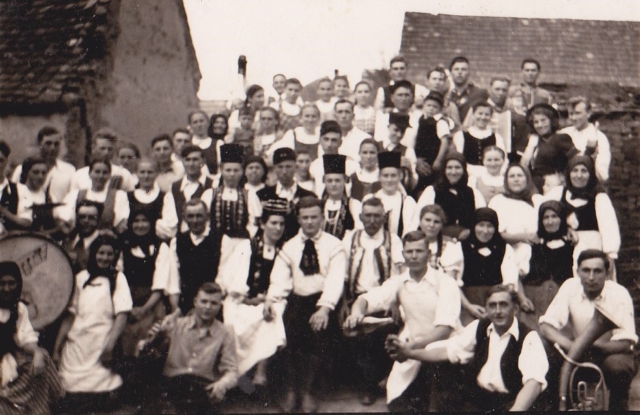 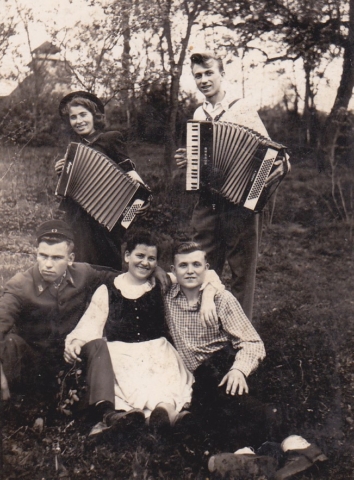 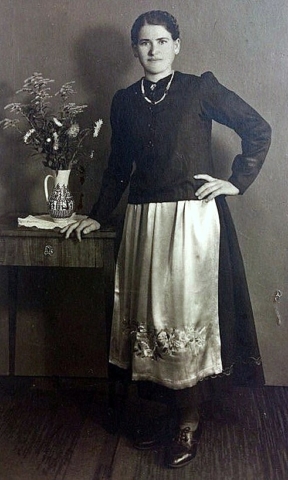 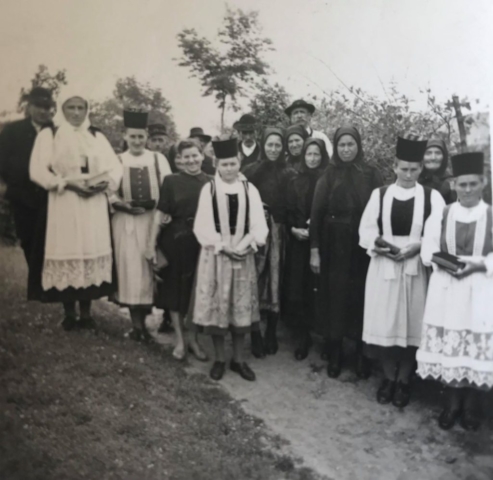 When I last saw my great aunt, a 98-year-old, frail woman who had already long been living in her own world and hardly recognized anyone, she looked deep into my eyes and smiled. This look, which has not let go of me since then, expressed so much more than words can say. Something connected us at that moment, something that persists to this day and perhaps was the deciding factor for this project.

Shortly after her death I began to look into her life and I discovered the story of a strong and courageous woman.

Anna Zakel was born on 26 May 1916, the seventh of eight children, in the middle of World War One. She was probably different from the other children from an early age, brighter and more boisterous. She rode horses, even though that wasn’t appropriate for girls back then. And she wouldn’t let anyone talk her out of it. Her village teacher also noticed her thirst for knowledge, intelligence and strong will early on. She knew what she wanted. And she knew what she didn’t want.

As was usual at the time, Anna should have celebrated a traditional Transylvanian Saxon wedding as a young woman. Just as it had been tradition for centuries – with a big celebration, homemade Hanklich cakes and the final “farewell” from the sisterhood. But this never happened, although Anna’s parents had prepared a wedding twice. Both times Anna’s brothers, including my grandfather, had to cancel the wedding the day before. Anna threatened to kill herself if she was forced to marry a man she did not love. Because since her early youth she had loved Ernst, the son of the village priest. I don’t know why they couldn’t or weren’t allowed to get married. But I know that she carried her Ernst in her heart for many years and never forgot him.

So here I had the answer to my question why she hadn’t started her own family, even though she loved children so much, especially her many nieces and nephews. My great-aunt Anna had decided against all conventions and norms of her time – and against the customs of the Transylvanian Saxons that had been handed down through many generations – to stay single rather than marry someone she did not love.

She experienced hardship throughout her life. At the age of 29 she was deported by Soviet troops because she belonged to the German minority in Romania. For three and a half years she performed forced labor in a timber factory in what is now the Ukrainian town of Karlovka, until she injured her hand so badly that she was sent back to Transylvania as “unfit for work”. On her return, she found her family in the stable, where they lived crammed between their animals in desolate conditions. Meanwhile, a Roma family had moved into the house.

In Anna’s absence the house and all the family’s land had been expropriated, including the vineyards outside the village, to which Anna had often ridden her horse. Together they all somehow managed to survive this difficult time and a few years later the family also got their property back. But my great-grandparents Margareta and Georg Zakel were not able to enjoy it for long. In the winter of 1954 both died two days apart.

In the meantime, Anna’s siblings had all started their own families and had either moved to larger towns or abroad. As the numerous letters testify, contact to her siblings was very important to her, especially to her two brothers who had already left the village at a young age. My grandfather Martin (called Marts) lived in Bucharest for many years and settled in Sibiu after his return from the Soviet labor camp and Michael (called Misch) started a family in Austria. How important these two brothers were to her can still be seen today – their portraits have been hanging in the parlor for many decades. 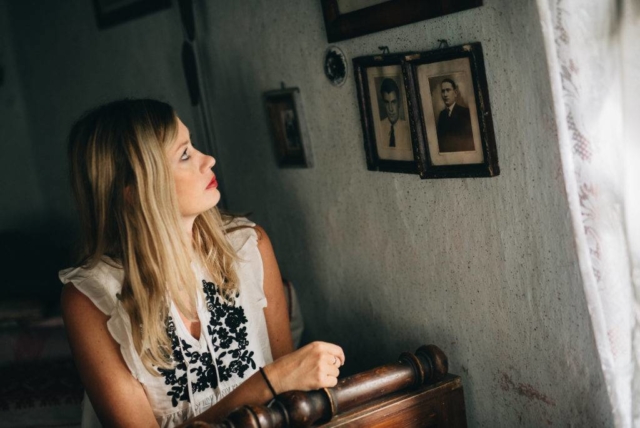 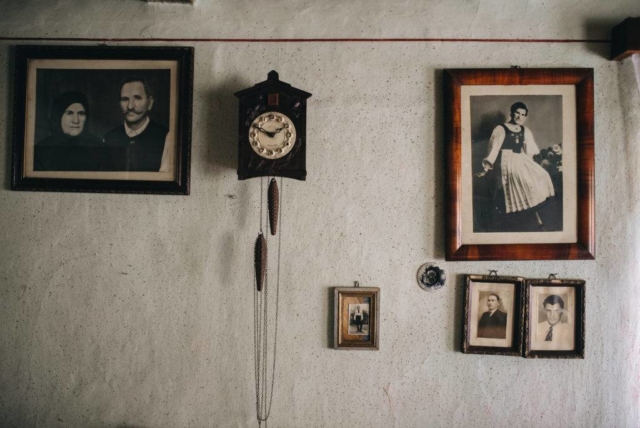 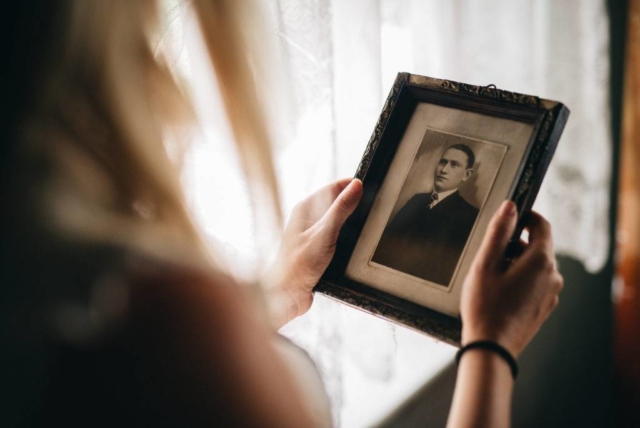 From then on, Anna, who decided to stay in the village after the death of her parents, worked the field with its sweeping view of the Kokeltal valley alone and with the fearlessness of a “true Saxon”. She enjoyed her life and was very active in many areas of village life.

Her open, communicative and funny nature meant she was very popular with all villagers, whether as a neighbor and friend or as a curator of the church for many years. Her talent for sewing soon made her a trusted seamstress in the village, where she was appreciated for her skills in repairing traditional costumes or sewing made-to-measure clothes, and also for being good company whilst she went about her work. 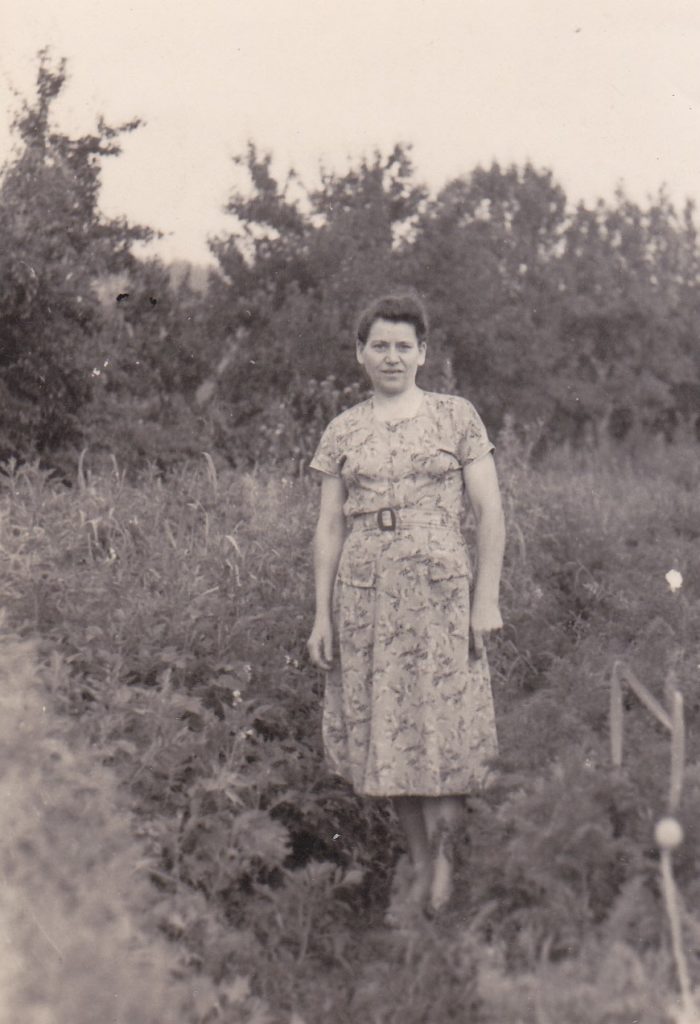 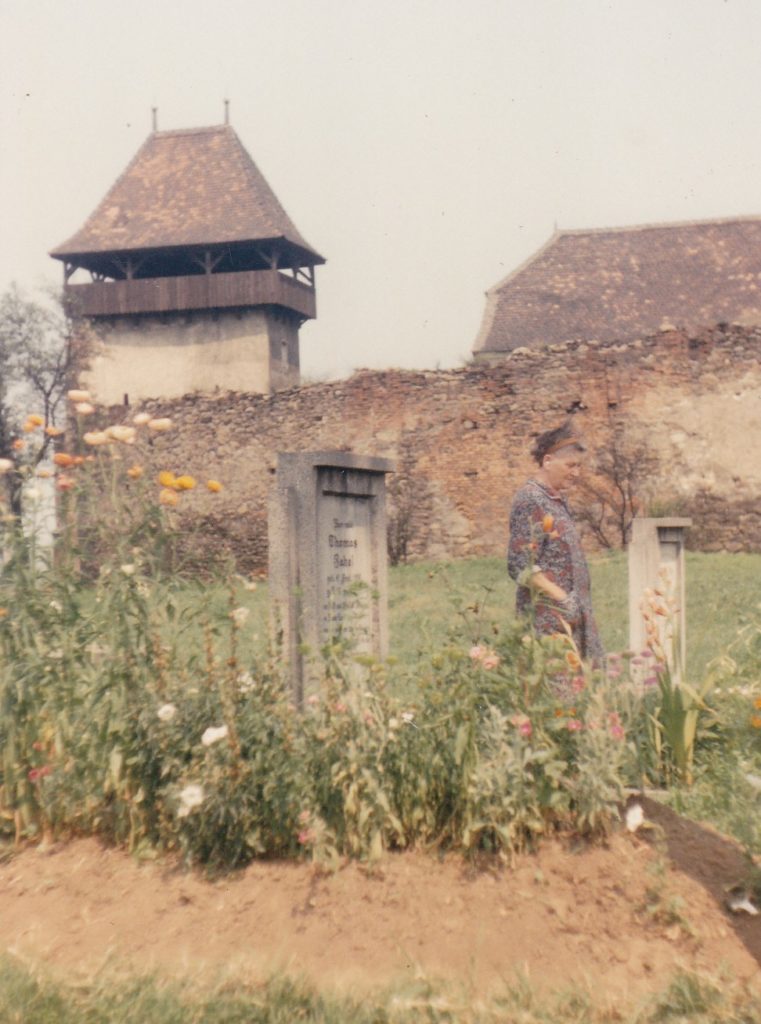 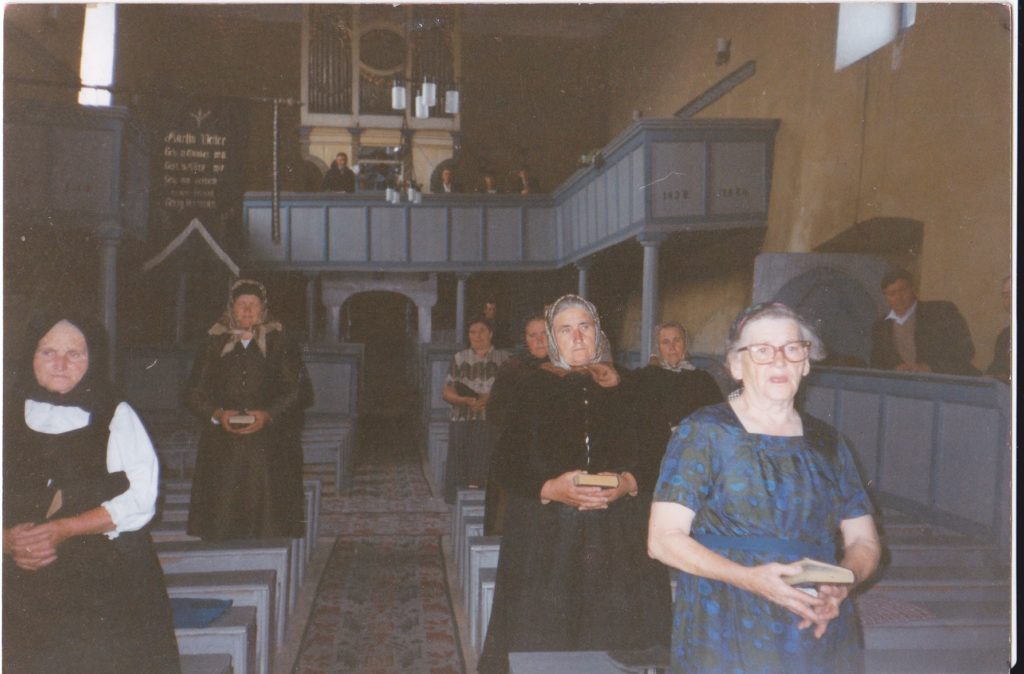 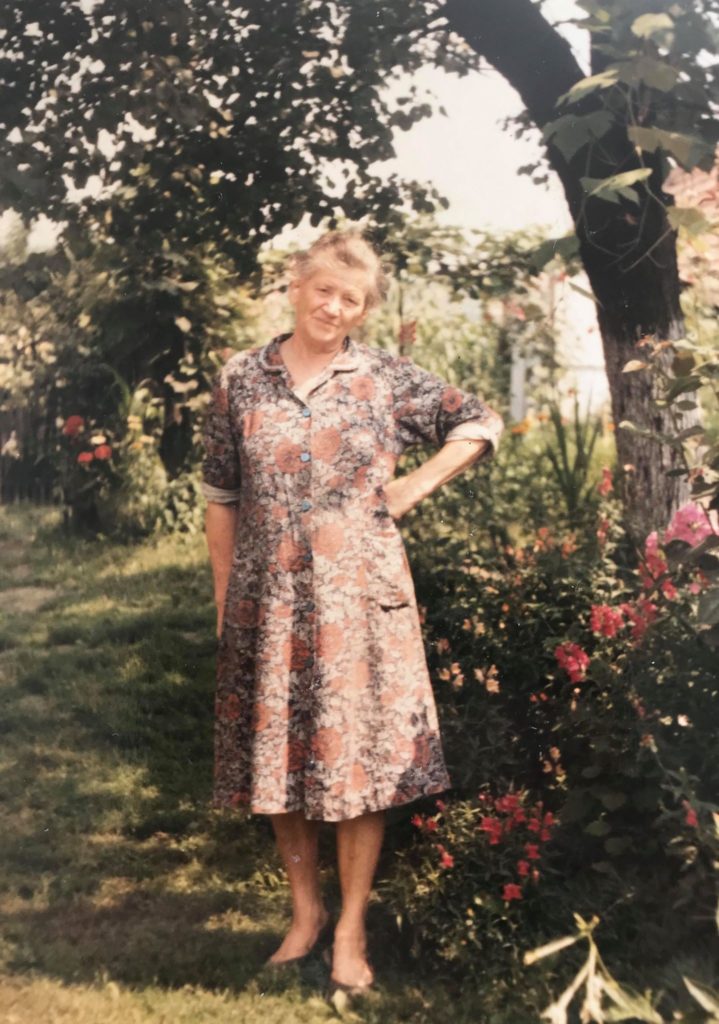 After renewing the wardrobe of all neighbors wanting to emigrate in the early 1990s so that they could keep up with the fashion in Germany, however, the conviviality was over. With sadness she watched as one house after another in the village became empty and as the community, which had become her family and support network over the decades, collapsed within a few weeks. Until she herself decided to emigrate. She left Transylvania at the age of 78 out of fear of being left alone and without social contacts in the village. She packed her suitcases and emigrated to Germany. But as much as my great-aunt, who was getting tired of the arduous work, wished for a simpler life in Germany, reality quickly caught up with her. The chapter “Emigration” ended for her after only five months, because she had been talked into believing that she could not get by with her meager Romanian pension in Germany. Disappointed by this experience but unwilling to rely on the goodwill of others, she chose to return to Transylvania for her modest but self-determined life. 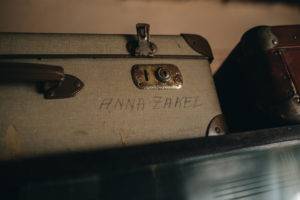 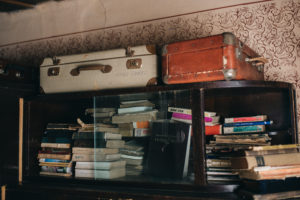 She spent the next decade running her house and farm, making wine and schnapps, continuing to work hard in the church, working on her sewing machine, reading books, welcoming relatives from abroad summer after summer, and happily pottering about in her garden – until her strength left her.

When life alone demanded too much of her, she left the village. She spent the last six years of her life in Deva with her niece Margarete, with whom she always had a very close relationship. Thanks to Margarete’s selfless care, my great-aunt felt protected, cared for and loved towards the end of her life.

On 12 August 2014 she finally returned to her “Appesstref” forever.

From the cemetery high above the village, right next to the old fortified church, this remarkable woman now watches over the restoration of her beloved parental home to its former glory. 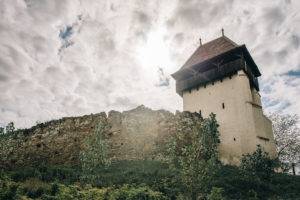 And this is exactly what makes the charm of this old house, which will bear her name from now on – originality.